First of all, let me apologize for the poor quality of these photos, I didn’t realize how blurry they were until just before uploading them! Regardless, I feel like this is a recipe that I just had to share, especially since summer has begun. This is a perfect dish to bring to barbecues, parties, or to serve as an appetizer at your own event. It’s relatively easy, doesn’t require cooking, and looks and tastes pretty great. I got this one from the boyfriend’s mother, who was generous enough to share it with me. I’ve enjoyed it when she has made it many many times, but this was my first attempt at making it. Overall, it’s a pretty straightforward, but there are a few special ingredients and tips that really make it outstanding.

1. So the recipe itself calls for a bag of shredded lettuce, but for some reason in the store I started feeling uppity and bought an actual head of lettuce. The time/effort of cutting the lettuce was totally not worth it, and really you want the very finely chopped lettuce which is a pain to create. So step 1 should really be, don’t get crazy and buy bagged shredded lettuce. 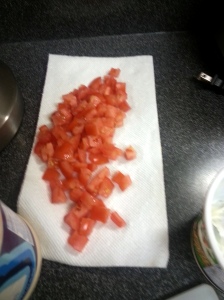 2. Chop the tomato, although this is the last layer of the dip, it’s good to do this first so that the tomatoes have time to dry, because if you put them wet on top of the dish, it’ll soak through and make it watery (yuck). 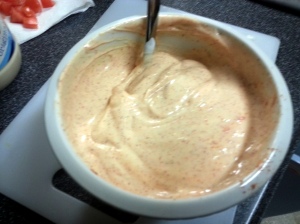 3. Create the sour cream layer. Combine sour cream, a spoonful or two of mayo, and somewhere between half and all of the taco seasoning. y best advice for this step would be just to taste test it until it tastes good.

4. In a 9 x 13 pan, spread a layer of bean dip. I think this is one of the best parts of the dip, because the bean dip has so much more flavor than regular refried beans.

5. On top of this, gently spread a layer of guacamole. Be sure to be careful, like when icing a cake, so as not to make the layers uneven.

6. Spread a layer of the sour cream mixture.

8. Sprinkle cheese on top of that. 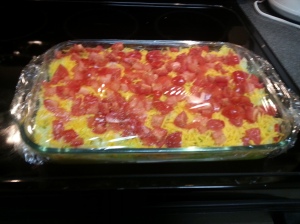 10. Serve with tortilla chips and enjoy!